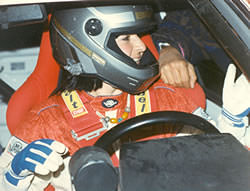 Maria Pavlis Korres engagement in motorsports began in 1981 as co-driver of Euripides Korres in a Mitsubishi Lancer following the family tradition which has started by her sister Tonia Pavlis. Euripides and Maria stayed together as a rally crew for several years, driving various rally cars such as Talbot Avenger, Talbot Lotus, Mazda 323 4X4 even a Kia Sportage. They also took part in Historic Rallying, driving cars made from 1925 to 1975. She went on driving in circuit racing, hill climbs and rallies, while she kept on co-driving in rallies and rally raids, both in modern and historical cars.

As a rally driver she teamed up with her sister Tonia, Danai Totomis, John Halaris and Lia Mosxonas, who became her favorite co-driver and with whom they proved very competitive even against strong male competition. Tonia on the other hand has been her permanent co-driver in historic rallying. Her favorite motorsport discipline is rallying, both as driver and co-driver, as she enjoys teamwork and sharing the experience.

She has won two national co-drivers championships next to “Leonidas” and Nikos Tsadaris. In 1988, co-driving with “Leonidas” in a BMW M3 they won rally “Vida” outright being the first Creek crew to win a European Rally Championship event. Her experience and skills helped many drivers win difficult one make chapmpionships as Nikos Peratinos (Zastava Yugo), Paul Hourdakis (Fiat Cinquecento) and Nikos Tsadaris (Toyota Yaris). She has also co-driven with “Iaveris”, Alkis Korres, Dionissis Arvanitakis, Aris Vovos, Nikos Makris, Thanassis Harmanis and George Fillippides. She has rallied in Greece, Cyprus, Bulgaria and Norway. She is counting 17 participations in Acropolis rally most of them on the side of “Leonidas” with many class wins in the amateur category. In the last years she has participated in the Historic Acropolis Rally with Takis Koutsikos, in  a BMW 2002 ti, finishing in high places overall.